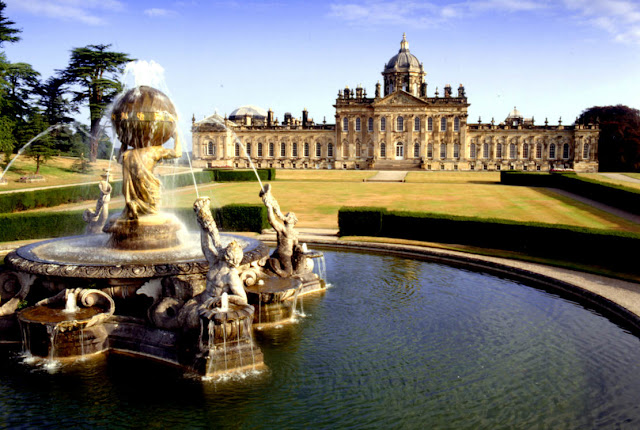 Y'all know I've been writing for several years.  It's been over 5 years since I first pressed "publish" on a rainy November night in 2008.  As my readership has grown over the years . . . I thought I might take a Thursday (every now and again) to re-publish a few missives from those first few years.  I thought I'd start with a wandering little story about my visit to Yorkshire many years ago.

Ah . . . . "Brideshead Revisited, The Sacred and Profane Memories of Charles Ryder." There are always those touchstones that seem to continue to influence one throughout one's life - and Evelyn Waugh's masterpiece from 1945 is one of mine. I received the DVD of the new film yesterday and have been watching various bonus tracks and commentaries since then. And, my, it brings back memories . . . .

I first met the story in a different form, in the early '80's, when I watched the PBS mini-series based on the book. 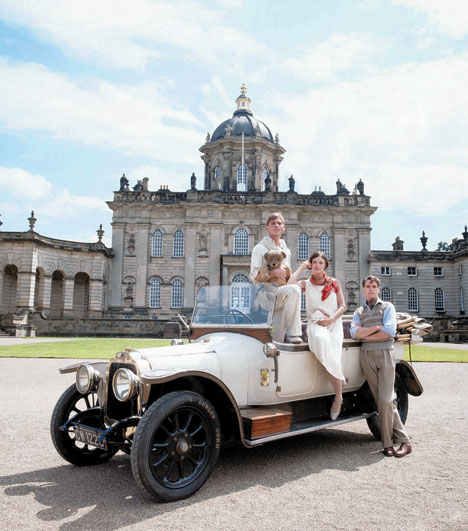 I can recall that I had a gruesome series of piano lessons on Tuesday evenings, and every week I would create some new, grand lie to tell Mrs. Cranston so that I could leave my lesson early and be home in time to see it from the opening credits. Seriously, it was like drowning in beauty and clearly one of my early influences and the beginning of my love of English design.

I was excited, although frankly a bit worried, when I heard that there was a new film production set to release in 2008. How was anyone ever going to be able to re-create the magic that I had felt as a teenager sitting in our darkened living room in Mississippi. The good news is . . . they didn't try. 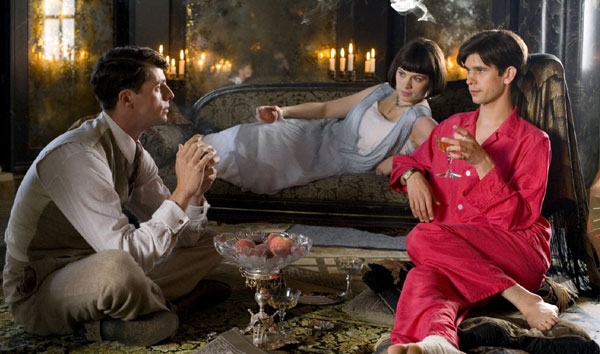 The new film is as different from the mini-series as either of them are from the original book (which I re-read usually once a year.) The story has been compressed, of course, and some plot lines re-ordered, but one must expect that when a 300 page book in condensed into a 2 hour film. I had the opportunity to see the film with a friend who had not seen the mini-series, so I had a chance to compare my impressions of the film with someone seeing it with 'fresh' eyes. Whilst not as grand as the book, and in many ways, not a magical as the TV series, it is a compelling re-imagination of a complex and twisting story. If you saw the film, I highly recommend the TV series. There are lengthy sections that are verbatim from the book and the cinematography is spectacular. and seriously, one of the best soundtracks on earth.

Ah . . . but my love of "Brideshead" does not end there . . . Above is a photo of the great hall (just under the central dome) at Castle Howard, the residence used as the setting for both the mini-series and the recent film. In 2002, I had the great fortune of spending a good part of a cold, rainy February day investigating the grounds and touring the house.

For those of you who know me (and know of my penchant for sneaking into churches to sing), I love hearing the acoustics of amazing spaces. While I was at Castle Howard that afternoon, there was a violinist playing folk songs in the great hall. I was still wandering about when I noticed that there was an sudden silence - and that the musician had taken a little break for some tea.

I asked one of the docents, somewhat humbly, if I could sing a bit . . . just to hear a human voice in the space. She giggled and said "Certainly."

So . . . after a deep breath, I launched into a series of Byrd motets and marveled at the sound flying around the huge dome. Wow. It was one of the most magical moments of my life. Just as the last echo faded, a kind gentleman walked through and thanked me for singing. I humbly thanked him, thanked the docent, and went on my way to see the glorious long gallery one last time before leaving.

It was several moments later when I realized the gentleman was, in fact, the honourable Simon Howard, the castle's current resident. I'm glad I didn't know who he was at the time, for surely I would have fumbled a awkward response . . . lol.

Ah, "Brideshead Revisited," such a constant in my life.

Karen said…
Scot,
What a wonderful story you've shared. I saw the film but not the series and I didn't read the book. I will be attending to both this year. There's nothing more comforting to me and Mr. B than British series of any kind.
Karen
April 10, 2014 at 1:02 PM

Lori said…
I LOVE that you wanted to have the experience of singing there. Life is way to short to not make those moments and have that thrill! Oh, and it's gorgeous:)
April 10, 2014 at 2:11 PM

Lee Caroline - A World of Inspiration said…
How surprising to see this post. Both my sons were actually born in York, I lived there for 6 years and my husband is from South Yorkshire. We lived just beyond the city walls of York in a Victorian terraced house, complete with marble fireplace...gosh that seems a lifetime ago as my eldest son has just turned 31!

Unknown said…
What a wonderful and charming story. You must be an excellent singer.
The Brideshead series was truly special, one of the best things I have ever seen. It did justice to the book.
I think one of the reasons I am underwhelmed by Downton Abbey is that it just doesn't measure up, in plot or writing or artistry to Brideshead. But that may be an impossible standard.
Castle Howard would be a dream to visit.
Thanks for sharing, truly.

Annie D. said…
Lovely story. I just attended a lecture given by Simon Howard this past Tuesday night sponsored by the Royal Oak Foundation on the history of Castle Howard. He was absolutely charming and the lecture was fascinating. I have yet to visit but it is definitely on my wish list.

Rebecca (joe's mom) said…
Great story! Loved the film and the series--the locations, the clothes, the acting. I could watch it over and over. How wonderful that you visited Howard Castle and sang in the great hall. Truly magical.
April 11, 2014 at 4:30 AM

tammy j said…
oh scot!
your own story seems to come right out of a film itself!
how delightfully unplanned and yet perfect. he will always remember the beautiful american!
April 12, 2014 at 2:52 PM

Chronica Domus said…
I remember the mini series airing on tv when I was still at school in England and becoming absolutely captivated. My sister had just purchased the book and we could not help ourselves as we read it before the series ended. It was just that good. I still make a point of watching the dvd once a year, and have read the book since too. It is my all time favorite. Thank you for sharing your Castle Howard story with us.
April 15, 2014 at 10:28 PM