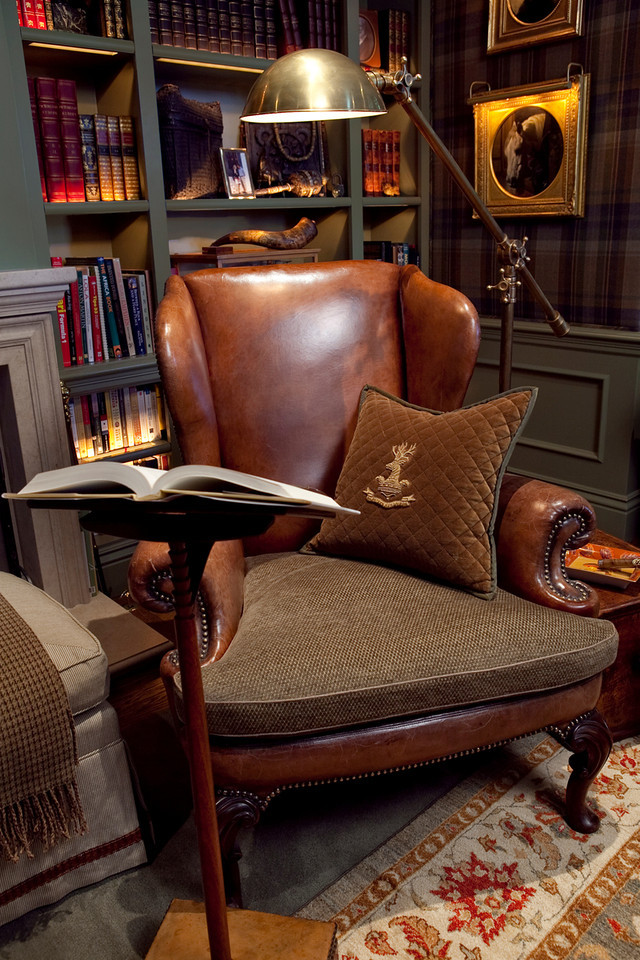 I'm always fascinated by the analytics that accompany writing this blog.  Sometimes my business degree gets the best of me - and I can spend hours digging through number and analyzing data.   Seeing which country has the largest readership.  Knowing which images on my Pinterest page send the most traffic to the blog.  What time of day I tend to have the most readers.  To know that y'all like it when I use images from Downton Abbey.  And I also love seeing which of my numerous posts get the most readership . . . 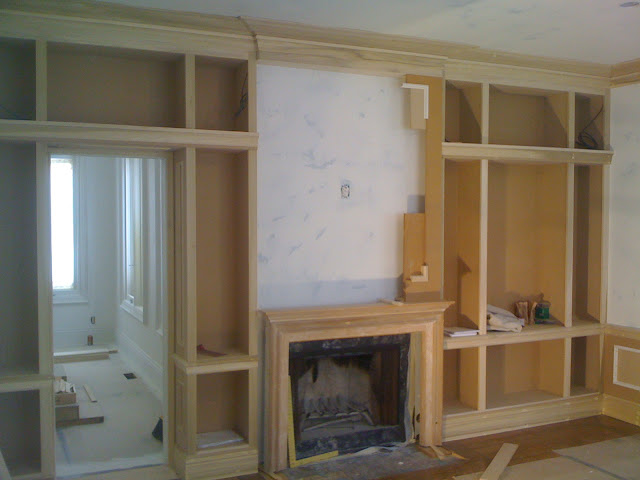 So.  Here is some fairly serious 'before.'  Just after the beginning of construction. Mocking up some trim options - and finalizing the shelving layout for the new library.  The wooden mantel was not going to be re-used, but because everyone involved liked the proportions - we were using it just as a place-holder until the limestone one was delivered.  We were also working with the shelving layout - and I was measuring all the books and artifacts that were going to end up being used along this wall. 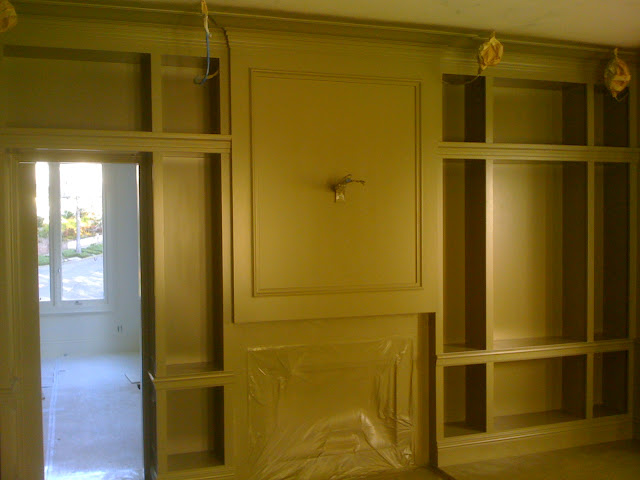 And now . . . a beautiful, rich paint colour for the woodwork.  We had toyed with the idea of a stained finish on the woodwork - but, there were also a great many other details for the room (custom upholstered tartan walls, a large collection of antique books, and so forth) and decided that the painted woodwork would be less of a 'design element' - and thus would function more as a supportive detail than a 'marquee' one.   It's always important to keep the entire project balanced.  The painted finish also gave the space a slight 'modern' element - to contrast with its eventual furnishings. 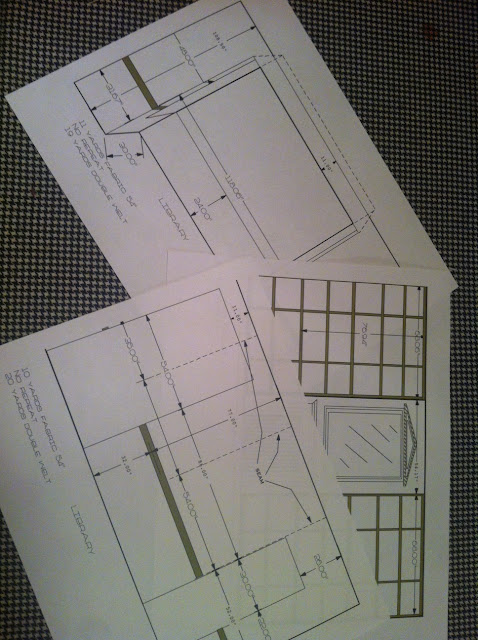 Because, now things are getting serious.   Almost 100 yards of a custom plaid were being milled in Scotland - a mixture of rich olive greens, russet browns, but with just a hint of soft lavender to keep things interesting.  The entire room was measured and graphed out - with all the seams and welting calculated.  So that . . . over the course of several weeks . . . we could do this . . . 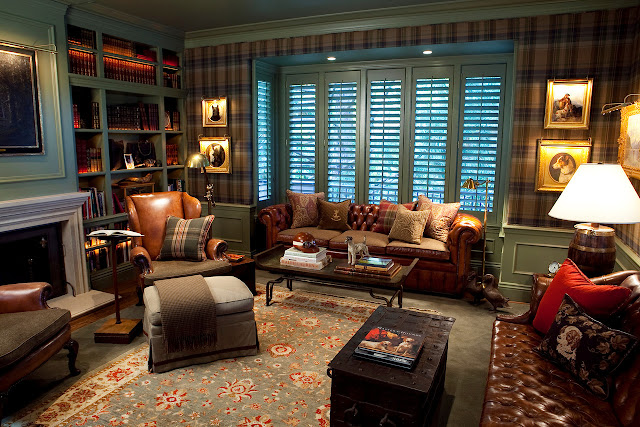 All dressed for a classic gentleman . . . and his retreat from the busy, modern world.  The painted panelling recedes - and the furnishings and collections leap to life in the space.

I'm just a little mommy blogger, but I'm always fascinated by the analytics side of blogging too, (I blame my sociology degree), my favorites are the random things that people search for in google and wind up on my page!
March 20, 2013 at 12:52 PM

Mademoiselle Michael Blog said…
Beyond brilliant. I just want to curl up and read Yeats in this room.
March 20, 2013 at 1:53 PM

katiedid said…
Scot!
I just love the color you picked for the shelving. And the fabric being custom milled...I imagine that was so much fun to decide what to create! Beautiful, as always.
March 20, 2013 at 2:03 PM

I think I can make you love the room just a slight bit more. it's not wallpaper. we upholstered the walls in custom wool plaid from Scotland. lol.

Sarah said…
I'm with Vignette Design, I could spend hours in this room. And yes, the idea that the "wall paper" is wool fabric makes it even more inviting. Stunning new library, Scot!
March 20, 2013 at 4:13 PM

Ron said…
This has to be one of my favorite rooms ever. I absolutely love the Ralph Lauren feel. What a beautiful, classy job!!! I want to sit in the leather chair and have a cocktail or three.
March 20, 2013 at 5:36 PM

April said…
Scot, this is a beautiful, classic room that a woman would enjoy being in, too. Love the leather Chesterfield sofas. Are they a pair? New or old?

The choice of using fabric on the walls is brilliant, too, since it absorbs sound so much better.

And explaining all the planning that goes into creating a successful room is so helpful. Too many people think anyone can be a decorator given a yardstick and a tax number!

Unknown said…
Greetings from Canada! I just found your blog, and am enjoying catching up...well that might take me a while;)
Love this project, and you are right we all love a good "reveal". Beautifully done!
March 21, 2013 at 7:08 AM

MJ said…
This was one of the very first things I pinned and it remains one of the most gorgeous, livable, sink-into-the cushions comfortable, rooms I've seen. Thank you for posting about this room - I had no idea the detail that goes into a design like this; I just reacted viscerally!
March 21, 2013 at 12:41 PM

Pinky at Designs by Pinky said…
GORGEOUS!!! I love everything about this room. The tartan walls are beautiful, the woodwork is a beautiful color. LOVE the chair. Everything is just perfection. Pinky
March 21, 2013 at 1:07 PM

The two tufted leather sofas are, in fact, not a pair at all. The larger one is a traditional 'Chesterfield' style while its mate is actually more of a settee. Both both are antique. The sofa belonged to the household long before I started the project - and the settee was sources here locally in San Francisco from Garden Court Antiques.

Leslie Anne Tarabella said…
This room is timeless and beautiful. It proves that what we all ultimately long for is comfort and peace.

Victoria at Home said…
Scot-Can you tell me a little bit about the lighting installation in the shelves? Looks like it comes from the top on some shelves and the bottom on others. thanks
March 21, 2013 at 3:11 PM

Unknown said…
That's a handsome room, Scot. These days, with the Internet giving almost everybody access to almost everything, it's easy for people to source cool things. What's hard for non-professionals is putting all those pieces together to create a coherent whole, not just a collection of cool-in-themselves "marquee pieces" that, because none of them is willing to take a back seat to the others, turns into a shouting match. As Frederick the Great said to Mozart, "Too many notes, too many notes!" Your decision to paint instead of stain was a good one.

By the way, don't worry about pandering to your audience. That only applies to posts that please other people, but not me. As long as I like it, it's not pandering. Carry on.
March 22, 2013 at 9:44 AM

debra @ 5th and state said…
skimming through my blog roll, with limited time, i was stopped at your title and said to myself "a before/after in scott's hands, is a must stop"
and you did not disappoint, brilliant!
debra
March 23, 2013 at 8:08 AM

Teresa Hatfield ~ Splendid Sass said…
Scot-
A not surprisingly stunning room! Love what you did here.
Have a wonderful weekend.
Teresa
xoxo
March 24, 2013 at 10:27 AM

oliver thomas said…
This is a second viewing for me of this absolutely beautiful room, i saw just the finished room on a previous post from Mr Scot a lil while back.
Amazing to see the "before"!!
A lil question, im one of your followers from over the pond...and would dearly love to know the name/no brand etc of the charming grey/green you used.

tammy j said…
i think you are magic.
you layer a room. and it's always just enough. and it looks lived in.
and it looks evolved.
the best kind of compliment.
kudos you handsome designer. kudos!
March 24, 2013 at 7:19 PM

Yes - the lighting on the shelving is placed in an exposed, open groove just behind the front edge of each shelf - so that it casts its light both above and below.

Unfortunately, the paint was a custom colour.

Carol@6WilsonBlog.com said…
I simply gasped. This is sooooooo stunning. You make me proud to continue to love traditional, despite the current vibe. This room is brilliant.
March 31, 2013 at 4:28 PM